Brussels, February 12, 2020
On 12 February representatives from the ICT4Water cluster participated in the annual event of the BRIDGE cluster, to which ICT4WATER was invited for the first time. The overall scope of the invitation was to explore synergies, interactions and potential paths for future collaboration.
BRIDGE is a European Commission initiative which unites Horizon 2020 Smart Grid and Energy Storage Projects to create a structured view of cross-cutting issues which are encountered in the demonstration projects and may constitute an obstacle to innovation. Its mission and activities are similar to the ICT4Water Cluster but focussed on the energy domain. BRIDGE encompasses 64 projects overall, out of which 25 are ongoing. BRIDGE is organised in four thematic Working Groups: 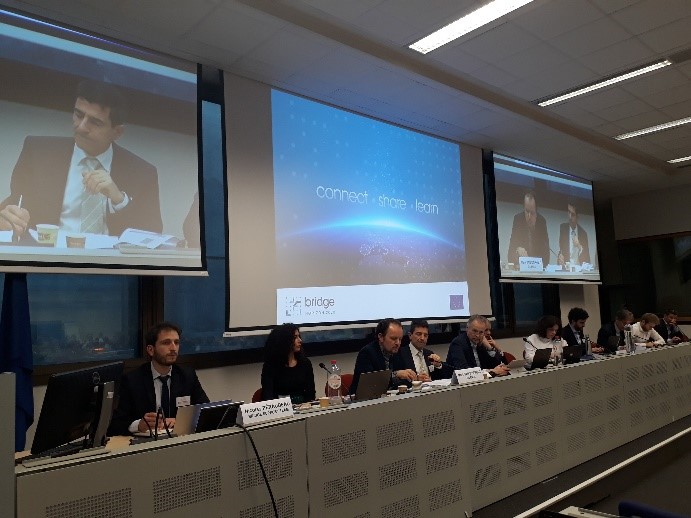 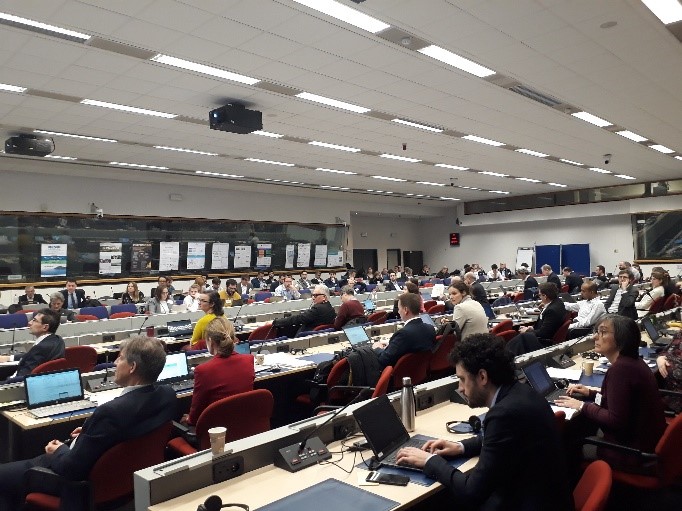 ICT4Water was invited to participate in three different parallel sessions. The conclusion of each of these sessions is described below.
Session 4 – Interoperability of flexibility assets.  One of the main conclusions from this session was that interoperability at function and information layer is crucial to exchange information between domains. Furthermore, it turned out that there is a common interest on using Smart Appliances REFerence (SAREF) ontology (SAREF4WATR & SAREF4ENER) to make information exchangeable between domains. There was also interest from the BRIDGE cluster on the ICT4WATER roadmap and the way ICT4Water tackles the ICT role in water, the long-term vision of each of the Action Groups.
Session 5 – TSO-DSO Cooperation – data management. This session revealed that BRIDGE has different projects pushing for different platforms/ standards/ models and is looking for interoperability across their implementations. When analysing the possible architecture, centralised vs distributed structure are the most common models. This is different from the policy ICT4Water follows in the water domain where (NGSI-LD, Next Generation Service Interfaces – Linked Data) allows to have centralised/ distributed/ federated approaches with the same interface. Some BRIDGE projects also target the use of FIWARE & SAREF as was also seen in Session 4.
Just as ICT4Water, BRIDGE also has projects who adopt cloud-edge architectures and show willingness to deploy smart functions (Machine Learning, Artificial Intelligence based) in their platforms. BRIDGE seems to deploy more systematic approaches to describe their use case and derive their interoperability models, something which can be improved in ICT4WATER.
Just as in ICT4Water, there are efforts in BRIDGE to set up a use case repository, using a standardised use case format. There was reference to a standard developed for the purpose of use case descriptions. This is something the ICT4WATER cluster could cooperate, use and benefit from. The need to share data widely led to modules for managing GDPR compliancy. The topic of energy storage or conversion to alternative carriers, which have a link to the water domain, was mentioned shortly in the discussion.
Session 7 – Sector integration / links between energy and water. Just as ICT4Water is looking at the water-energy nexus, BRIDGE is doing the same from an energy perspective and is looking for interactions between water and energy. BRIDGE has listed the water domain under “industrial users” of energy, although agriculture consists of a separate category. Knowledge and research about the Water-Energy-Food Nexus is limited in BRIDGE, but they were very interested in the concept as it shows a different way of thinking beyond cost savings, which is the usual practice in most BRIDGE projects. BRIDGE also showed interest in circular economy and the production of energy from wastewater treatment plants. There was agreement that there is need for common EU calls on energy and water. 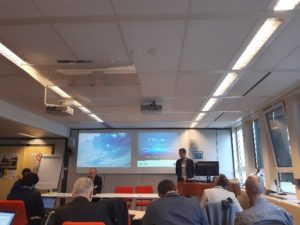 There is a need within ICT4Water to gain a better understanding of the energy domain and the roles of the different actors like DSO (Distribution System Operator) or TSO (Transmission System Operator) and to see if the value chains and lifecycles are comparable. Some aspects in BRIDGE are strongly different (low response time required in demand-response system) compared to what we are used to in the water domain, but some possible investigation ways are related to models used for water trading.
Energy trading differentiates energy depending on some parameters (green energy, consuming time, etc.). The water sector starts looking at trading of different type of water (grey water, etc.). An exchange of opinions/discussion between the two thematic groups would be useful.
In the energy sector, end users also have the capacity to sell part of their locally produced energy, although the capacity for storage is limited. This is equivalent to rain harvesting and should be explored as parallel option.
It was decided to invite BRIDGE representatives to the ICT4Water annual event on June 16 in Brussels. The intention is to ask for representatives from all their thematic Work Groups/Task Forces and liaise with the ICT4Water Action Groups. Also, a representative of the Directorate-General for Energy (DG ENER) will be invited to join the panel discussion.
To establish a longer-term relationship or collaboration between the two clusters, the idea of exchanging “observers” (long term/permanent) among the BRIDGE Task Forces and ICT4WATER Action Groups was raised. The other way around, ICT4Water experts will be enlisted in the Working group of BRIDGE, discussing the sector integration so to contribute from the side of water.
An option for a joint workshop with standardisation bodies will be investigated and ICT4Water will actively promote and disseminate Nexus thinking/modelling as strategic planning within the Energy sector.

The following people from ICT4Water and the Action Groups and member projects participated in the event: